Office of the Children's Commissioner

The overwhelming majority of children (93 percent) in the UK play video games. Yet despite its popularity, the culture of ‘gaming’- its rules and its rituals, the varying profiles of players, the risks they face – tends to be spoken of by adults, whether they be policymakers or parents, as if it were an alien landscape.

While children can get great pleasure from playing games, either alone or with their friends, the widespread popularity of gaming and the evolution of gaming from offline to online has raised a number of concerns, such as children being able to talk to strangers or becoming the target of bullying. Many of these concerns tend to stem from more general concerns about child safety online rather than actual experiences of gaming. There are worries that over-exposure to video game content may have a damaging effect on the development and socialisation of young people, something compounded by concerns about the length of time children spend playing. A growing concern is around the potential for children to be negatively affected by violent imagery and other inappropriate content. The possible link between gaming and gambling, and the concurrent risk of addiction, is also a source of concern.

We spoke to children aged 10 to 16 to better understand what they love and what they dislike about gaming and how gaming could be improved for them.

A form of play: the positives to online gaming

Children say there are benefits to playing online. These can include socialising with their friends, learning new skills, and above all, having fun. In this way, online gaming extends normal play into the digital landscape, and children play by the same social rules that they apply offline. Most online social interactions are with people the children already know outside of online gameplay, such as school friends, and gaming provides a chance to build on these connections. Children choose to play games they know their friends are playing in order to cement their friendships and bond over common shared interests.

In a world where children are less and less likely to be allowed out to play with friends outside of the home, for many children, online gaming and their social lives are closely intertwined. Children consider the shared experience of gaming to be just as important to their friendships, as other non-digital experiences. For some children, online gaming provides a social network through which they can also just talk to their friends, regardless of whether or not they were actually playing.

Social harms and the negative experiences of online gaming

However, children also say there are negative aspects to playing online, including feeling frustrated or being teased and bullied by both friends and strangers. Despite the fact that many of the same offline social rules apply to the online world, in some instances, children notice a difference in friends’ behaviour when playing online games. This was fuelled in part by the privacy of headsets and a perceived lack of consequences for teasing or bullying online.

Children are scorned in games such as Fortnite if they are seen to wear the ‘default skin’ (the free avatar they receive at the start of the game). Children say they feel embarrassed if they cannot afford new ‘skins’, because then their friends see them as poor.

Some children talk about the aggressive and unpleasant behaviour they experience from other players, for example having their work destroyed.

Children also say that they encounter risks from strangers online – for instance, the risk of being scammed for their personal information. For example, on the popular online game Roblox, children report being offered access to ‘Robux generators’ by other players to improve their game, in return for personal information or passwords, was commonplace. There were a couple of instances in which children had met and formed friendships with online strangers. In these cases, children felt that they had been careful in these interactions but recognised that forming these sorts of connections with strangers online could be harmful.

The close link between online gaming and their social lives means that in some cases children feel compelled to play even when it detracts from other activities. Children can think of alternative things to do if they are not able to play online games, however, would also say that they would become frustrated if they could not play for a long period of time. 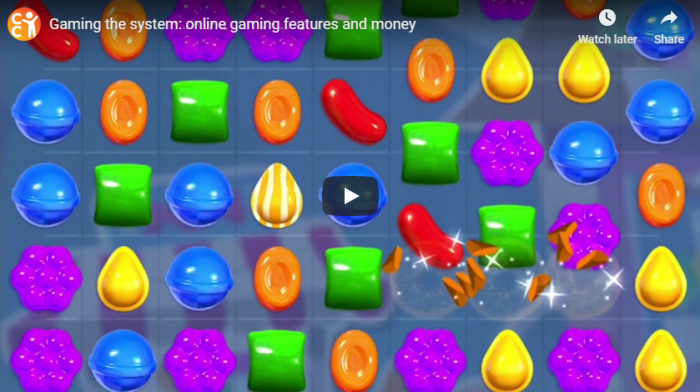 The amount of money children spend on games varies. In some cases, the amount of money children report spending on games has increased annually, with some spending over £300 in one year. Peer pressure from friends and online strangers, as well as influence from famous gaming YouTubers, are all factors that children say lead to them feeling pressured to spend money on in-game purchases.

Game design also encourages spending. In games such as FIFA, children can either improve by investing significant time to build up their squad or spend money in the hope of quickly advancing their position. The latter option – to spend money in the hope of progressing – is the most popular option across the sample. With new editions of FIFA being released every year, children feel as though there is an expectation and pressure to buy new players, spend money and build up their team as quickly as possible.

In some cases, this spending was done in order to receive a collection of unknown rewards, so-called loot boxes. The most obvious example of this is FIFA player packs, which some children acknowledged as being similar to gambling.

“It’s like gambling- you could lose your money and not get anyone good, or get someone really good”

The lack of guaranteed reward from these purchases can leave some children feeling as though they have wasted their money. The potential to receive a good reward means that children also feel that they are not in control of their spending, and sometimes try to ‘chase losses’. In general, children do not have effective strategies to manage their online spend.

If gaming is an online extension of children’s offline lives, then the rules should be the same

Given that gambling is not allowed in children’s offline lives, its presence in their online lives requires close attention. Adults who gamble often tend to have boundaries and control measures in place to mitigate against harm. Children are unlikely to be able to put these in place for themselves. If there are concerns around exposure to gambling at an early age offline, then those same concerns should translate into the online world.

The Government’s proposed duty of care addresses some of the harms revealed in our research, including cyberbullying and violent content. Underage use is also a problem, however the white paper refers to this specifically in relation to social media, not gaming. And our research reveals major harms on online gaming platforms, especially financial harms, which are currently not listed as within scope of the duty of care.

Buying a mortgage without advice
Recycling in Reality