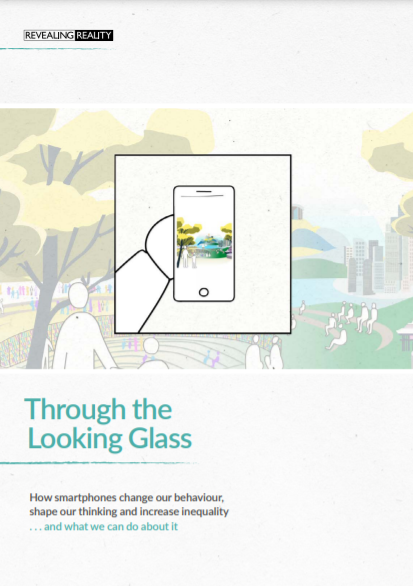 Through the Looking Glass

Through the Looking Glass
1. Introduction: How smart are you with your phone?

For over a year, we have been researching the ways people use their phones for an ongoing project we have called Through the Looking Glass. We have compared what people say about how they use their phones with what we can see through observation and using innovative technology that records what is on their screens.

What we have found is that there are often stark differences between what people say they do and what they really do.

While we’ve been carrying out our research, there have been increasingly loud warnings that smartphone use is a public health risk associated with mental health problems, poor sleep, addiction, bullying and low self-esteem.

Most of this discussion has looked for someone to blame or called for sweeping policy or regulatory changes. It has tended to focus on social media as distinct from other content, calling on ‘tech giants’ to change the ways they operate or what they do with our data.

Some schools have banned mobiles. The UK’s chief medical officers have issued advice for parents on screen and social media use for children and young people. The government is consulting on plans to make companies more responsible for their users’ safety online.

Increasingly, we’re all encouraged to do a ‘digital detox’ or install apps that limit – or at least measure – our time online.

But phone use is not as straightforward as many other public health concerns. Smoking is unarguably bad, exercise is nearly always good. Even when it comes to diet there is usually a clear sliding scale that says too much of anything, and some foods in particular, is not a good idea.

Phone use is different. Setting abstract screen-time limits or telling people to switch off are too simplistic and undermine the many benefits the technology can bring us individually and collectively.

But there are risks or potential downsides to the ways we use our phones, and these are unlikely to be addressed by taking a side-swipe at tech giants, restricting particular apps or telling children they can only use their phones for a certain amount of time each day. The negatives will just manifest themselves in other ways.

Even plans to legislate for online harms may have unintended consequences. In deciding what is deemed officially harmful or unsafe, we also send an implicit signal that everything that falls outside the remit of regulation is fine. But in practice there are grey areas. Some content and activities deemed ‘safe’ are likely to still have harmful effects for some people, some of the time.

There’s little talk of the digital divide anymore – almost everyone who wants to can be online – but that doesn’t mean inequalities relating to technologies have gone away.

Has the rapid adoption of smartphones benefited everyone equally? Do some people suffer more negative effects from their smartphone use than others? Does the pace of change create unequal advantages?

These are all questions that go beyond thinking of smartphones or the technology behind them as simply good or bad for us.

One of the most powerful things we have captured using screen recording technology in our research is just how different our individual experiences of our phones can be.

We all know, on an intellectual level, that our own social media feed is different from someone else’s, that the content we are shown changes according to unseen algorithms using our personal data. We make jokes – or accusations – about people being locked in filter bubbles or echo chambers.

But actually watching back what someone we don’t know has seen or done on their phone can be jaw-dropping. What other people see is not just a bit different from what we see or do on our own phones, it can be almost completely unrecognisable. Inside our smartphones we live in wholly different worlds.

All this has consequences. And these consequences are unlikely to be the same for everyone. The danger is that smartphone use entrenches – or even worsens – advantage or disadvantage. More vulnerable people are more likely to suffer more harm – and at the same time be the least aware of it.

Our research and the conclusions we have drawn from it suggest that we all need a more nuanced way of thinking about how we use our phones, so we are conscious of what we are using them for and why, and what consequences this might have.

We need to ask ourselves: What is my phone good for? What is it not good for? How does its design affect the way I use it? Am I stopping to consider whether it’s the best way of achieving my goals?

How smart are you with your phone?