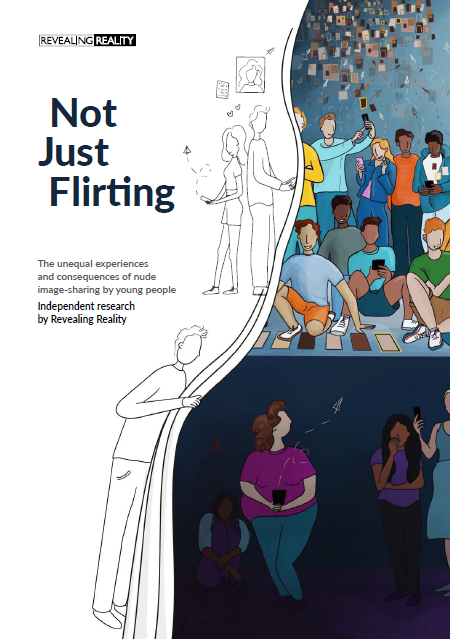 Revealing Reality has uncovered how the widespread sharing of nude images among teenagers can lead to troubling experiences and sometimes long-lasting problems for young people, who can lack the confidence, knowledge or language to handle it.

In a self-funded project, we conducted a detailed survey of over 5,000 teenagers in schools in partnership with the PSHE Association and interviewed 22 young people in detail about their experiences of nude image-sharing.

Girls – in particular girls from more disadvantaged backgrounds – often have the most negative experiences, coming under particular pressure to share nude images, from a younger age, and facing more damaging consequences if their images are shared widely.

The research, Not Just Flirting – the first of its kind to explore the topic in this level of detail – also highlighted that often boys say they send nude images because they think girls will like them and they want to be sent images in return, while girls are more likely to say they share them because they feel under pressure to do so and that they feel ‘disgusted’ when they are sent images they don’t want.

More than a third of the girls surveyed said they’d first been asked to send a nude image when they were 13 or younger.

Among the young people taking the survey who had ever been sent a nude or nearly nude image or video, 82% said that when people sent nudes they usually or always used Snapchat to do so.

On the back of this research, the PSHE Association has published new lesson plans that schools can use to help young people consider their motivations and behaviour when it comes to image-sharing.