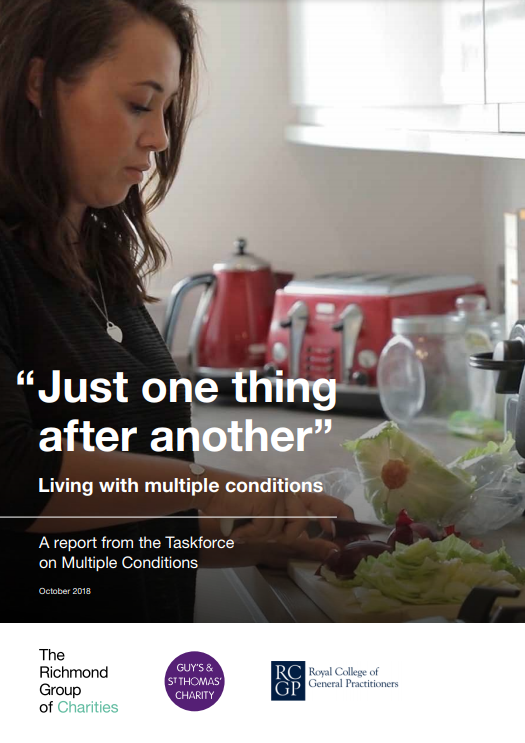 People are increasingly likely to be living with more than one long term health condition, yet there is a significant evidence gap around their lived experience. Our research sought to bring the experiences to life of this previously under-represented population.

We conducted in-depth research with 10 people from across England living with multiple long-term conditions. The interviews, conducted in participants’ homes, covered their interactions with the health and care systems, support networks, coping strategies and the changes participants had made, or had been forced to make, over time.

Our ethnographic style of research allowed us to understand the wider effects of their illness – the consequences of their conditions were often cumulative, the appearance of a new problem would worsen the other and not only had an impact on their physical well-being but also other aspects of their life such as their jobs, families and friendships.

To minimise these cumulative effects the report recommends that professionals and carers do as much as they can to promote mobility, encourage the person to take an active role in the management of their conditions and help the person identify achievable goals.

Films made by our production team told the stories of people living with multiple conditions:

Similar work
What matters should be measured
“What gets measured gets managed”. Which is one of the reasons we are really excited that Internet Matters asked us to produce the first index on the...
children
health
media
social media
technology
young people
DOWNLOAD REPORT
You only had to ask
Our current healthcare system requires people to have a certain level of ability, agency and confidence – to push for the right care and manage their own health outside ...
ethnic minorities
health
place based
vulnerable people
DOWNLOAD REPORT
Maximising the appeal of weight management services
Department of Health Research report exploring attitudes to weight loss among obese and overweight people – in particular...
health
DOWNLOAD REPORT
Attitudes to diabetes among South Asian communities
We revealed how attitudes to Type 2 Diabetes among South Asian communities are dominated by fatalistic myths and cultural n...
health
DOWNLOAD REPORT