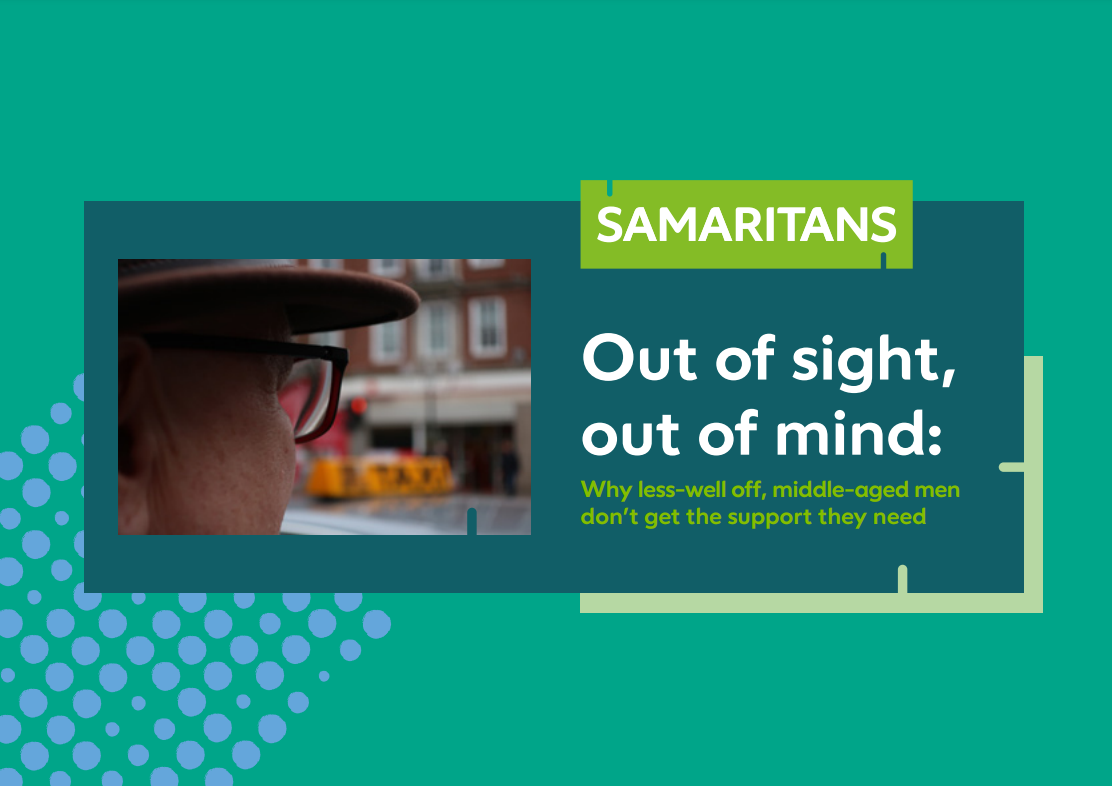 Why don’t middle-aged men on a low income engage with services when they are struggling?

It’s a sad fact that men are more likely to die by suicide than women. This is especially true for men who are middle-aged and less well-off.

But why aren’t services picking them up? Is it that services are set up with a more ‘feminised’ model? Is it that men don’t like talking about their problems? Could services and interventions be better designed for these men?

We spent time with 15 men across the UK and Northern Ireland who had experienced varying life events and challenges during research for the Samaritans. Many had left school with minimal qualifications and struggled to find meaningful work, many had experienced relationship breakdown and separation from their children, and some had battled with substance misuse and spent time in prison.

A minority of the men we spoke to were engaging with ‘traditional’ services such as mental health support groups, however these were often not the types of things that seemed make a positive impact on these men’s lives. Instead, the services and activities, whether formal or informal, which engaged men were those which gave them an opportunity to contribute – to other people, to the smooth running of a group or society as a whole. This rings true – who doesn’t want to feel valued, wanted, trusted? Sadly, many of the men we spoke to had not been equipped with the skills, or given the opportunity, to contribute for far too long.

Tom, for example, had experienced domestic violence as a child and subsequent heroin addiction. He was in and out of youth prison and homeless for seven years without anyone seemingly noticing or stepping in. He had attempted suicide three times in his twenties. Now in his forties, he finds great satisfaction in helping to cook and cater for older people within his community. “There are some amazing OAPs. I get to cook food, and talk to the older people. One was alive during WW2 and he talks about all his experiences and it gives me some perspective on my own life.”

Jack had a car accident in his forties that left him unable to work. He was isolated at home for several years before finding a local men’s group by chance. He is now responsible for locking up the community centre where they meet every day. Being responsible for collecting subs and opening the group has “…made me feel good that someone relied on me, trusted me, and I’m not a waste of space…”.

Through doing these activities and having responsibility, the men found purpose and a connection with others. Notably, many of these activities were not framed as a ‘mental health support’ but were activities or groups that were woven into the everyday community.

Being linked in too late

However, our research revealed that most men were not finding this sense of contribution and connection until far too late in their lives, and some not at all. Despite multiple cues that these men were struggling—for example inability to find work, time in prison, poor physical health—these men had been left to drift for many years with little intervention.

George was a talented young footballer before he became injured. He struggled with finding work and substance addiction for large periods of his life. He explained how this came in cycles and was very hard to escape. “I stayed clean for about nine months, again various dead-end jobs…fell back in with the same crowd, started using again”. It wasn’t until George was in his forties that someone linked him in with a local charity where he trained to become a support worker.

The life-stories of the men we spoke to suggested the threshold for external intervention was exceptionally high. Services, activities, social groups that would suit these men and support them do exist, but the signposting to them is limited and it was clear that many professionals didn’t see it as their place to intervene and help men engage, or if they did, they often gave up too easily. These men had often built identities around self-sufficiency and independence, and this was reinforced by the way society and support systems engaged with them – in many of the stories we heard someone stopped the spiral of hopelessness by making it their business to help someone who was isolated reconnect, and discover the purpose they had been missing.

Research conducted with middle-aged, low income men is rare, as they are a notoriously difficult group to recruit and engage in research and the sensitivity of the topic means there are also ethical considerations around asking men about negative periods in their lives. This research shows the importance of not letting challenges like this stop us from exploring what would make a difference to people’s lives. The men we spoke to were keen to reassure us that sharing their stories was a positive experience, particularly as they felt they might help others.

The problem isn’t talking to men like this about their experiences and what they’d like to give; in fact, they were ignored for too long.

Similar work
What matters should be measured
“What gets measured gets managed”. Which is one of the reasons we are really excited that Internet Matters asked us to produce the first index on the...
children
health
media
social media
technology
young people
DOWNLOAD REPORT
The future of voting
If the end goal is to increase voter turn-out, ‘making the process easier’ feels like a simpler solution. That’s the suggestion that the general public default to f...
elections
service design
UX
DOWNLOAD REPORT
Who’s missing out? Connecting people in residential care
Let’s be honest with ourselves. Many of us really don’t want to think about a future where we are livin...
design
elderly
media
technology
vulnerable people
DOWNLOAD REPORT
Just one thing after another
People are increasingly likely to be living with more than one long term health condition, yet there is a significant evidence gap around their lived experien...
health
DOWNLOAD REPORT