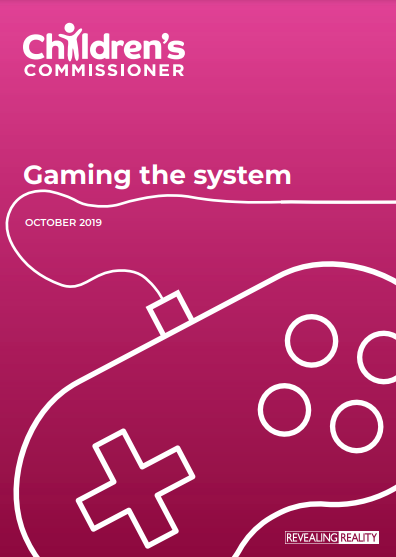 The world of online gaming is often spoken about by policymakers, parents and the media as if it’s an alien landscape entirely detached from the real world. In that landscape, so it goes, children are being exposed to a range of harms—interacting with strangers; teasing and bullying; gambling-like features—that are difficult to monitor.

We’ve been studying the online behaviours of children in depth for several years. For our latest project, undertaken for The Children’s Commissioner, we explored the effects of online gaming on children between the ages of 10 and 16. What we have produced is one of the most detailed pieces of research on the harms and benefits of online gaming from the perspective of children.

Despite periodic warnings in the media of the perils faced by children in the online world, we discovered a more nuanced picture. The risks for children related to online gaming have in many, but not all, cases been misconstrued. There are potential harms, but these are not the ones most commonly talked about. Moreover, children display greater agency in knowing how to mitigate risks than most appear to believe.

Many of the assumed harms of online gaming relate to exposure to violent content, but children we spoke with showed no signs that they were being desensitised.

“The nature of the game is violent but you know it’s not real.”
Aman, 16, Call of Duty player

Much has been made of the possible link between violent content in games and violent behaviour in the real world. Numerous academic studies have sought to determine whether the former causes the latter. But the children we spoke with understood that any violent behaviour they pursued or witnessed in online games would have very severe consequences if mimicked offline. The distinction between real life and fantasy was clear to most, and children were clear in their communications about the positives and negatives of online gaming.

Gaming can impact positively on children’s lives, particularly when it comes to socialising and creative thinking

“Because we already had a base, we helped our friends build a new house.” Lawrence, 12, Minecraft player

For children, gaming is an extension of play. They use it to fill their free time or socialise with friends outside of school. “I can chat to all my friends when they’re not actually with me… or if they just want to tell me stuff in private,” one 10-year-old Roblox player told us.

And like other forms of play, much of what children learn while gaming online can be used in their everyday life. Think of Minecraft, where players can build their own house, brick by brick and shelf by shelf. Interests are developed within the game that can carry into the real world. Children learn new skills—strategy, social cues, problem solving, teamwork—and meanwhile, many we spoke with displayed an understanding of what did and did not constitute fair behaviour online. This could inform responsible behaviour offline.

Fears around children interacting with strangers arose largely in response to social media. But the nature of online gaming is less suited to that kind of interaction.

“I never properly have a conversation. I normally just say stuff about the game or that I’m really enjoying this.”
Kaiden, 10, Roblox player

The assumption goes as follows: children log onto an interactive online game and they begin speaking with a stranger, either by text chat or headsets. Before they know it, they have handed over personal details, and/or are on the receiving end of abusive language.

However, the reality, as we found, tends to be somewhat different. The above process has of course occurred, but it isn’t inevitable. Although children use gaming as a form of socialising, the pool of people they interact with is often smaller than on social media, and conversation tends to be focused on the game itself. Children showed little interest in talking to people they didn’t know, instead concentrating on playing, and many muted microphones and disabled chat boxes. Some even found it amusing: “When people rage, [it’s] funny,” one boy said. In short, they had developed strategies to mitigate the risks that can come from interacting with anonymous strangers online.

But it’s not all rosy. Certain games encourage children to spend money on in-game purchases that offer unknown rewards

Adults make up the majority of gamers in the UK, meaning most games tend to be designed with adults in mind. Certain in-game features, such as FIFA Player Packs, encourage players to spend money to improve their performance, despite them not knowing what they’ll receive in return. This presents problems for children, who are exposed to gambling-like mechanics that they would normally be barred from engaging with offline. As one 14-year-old FIFA player told us, Another said about spending money: “You feel ripped off if you haven’t gotten anything out of it.”

Certain games, like Fortnite and Roblox, give players the option to buy ‘skins’—clothes that, depending on how much money is spent on them, improve in style. This purely cosmetic attribute does nothing to boost performance. However, children reported that it does affect their online social status to the extent that it can attract teasing, just as having cheap clothes in the offline world could be the cause of ridicule from peers.
The rarest ‘skins’ are charged at a premium rate, and will often stay in shops only for 24 hours, meaning there is even greater pressure to snap them up. Young children who cannot afford these are given an early taster of socioeconomic disparity, and the bullying that can result. An in-game mechanic has therefore been created whose ripple effect could extend far beyond the gaming world.

Our work on children’s online behaviours will continue to be developed, and we are always interested in collaborating with others to push the research in new directions.