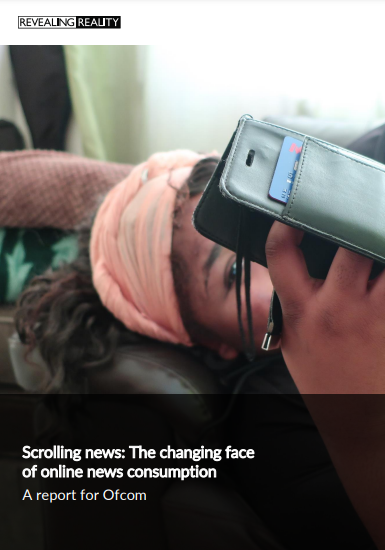 In just a few years, news consumption in the UK has changed beyond all recognition. Gone are the days when the majority of people bought a paper in the morning, watched the TV news in the evening, and had little or no exposure to news in between.

Online news consumption is now widespread, even by those who claim to rely primarily on ‘offline’ news. However, the extent of online news use, or the attitudes and behaviours linked with it are still not widely understood – which is what prompted Ofcom to commission us to explore online news behaviours.

So Ofcom commissioned this research in order to find out more about the differences between what people say they do when it comes to online news, what they believe they do, and what they actually do.

Using a combination of deep-dive interviews, media diaries, and innovative digital tracking activities gave us an unprecedented insight into peoples’ digital behaviour. By looking at browser histories and recordings of their screen use, we could see how far their actual behaviour differed from their self-reported descriptions.

What we found was that people frequently under-report the extent of their online news consumption and weren’t clear how or why they had seen particular stories online – particularly via social media.

For most people, accessing news online now means accessing it on their mobile, where the predominant news consumption behaviours – scrolling, tapping, swiping – are incredibly passive. We saw that people struggled to think critically in the face of such frequent, passive news intake.

Social media blurred the boundaries of what was news or not news, and – unlike the days where people read a paper in the morning and watched the news in the evening – people often felt overwhelmed by the constant stream of information available to them.